judgment of the organized church, katrina 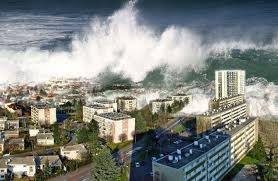 This picture is a giant wave from Hurricane Katrina crashing down on the Gulf Coast seven years ago.

New Orleans is my hometown and we lost everything in Katrina.  I can remember barely escaping the ravages of Katrina.  I evacuated with a group of church members; a caravan of three vehicles filled with approximately 20 people.  We waited so late to leave N.O. that we had to drive east instead of west…right into the storm.  Riding along the Gulf Coast and near Mobile, AL, I can recall us driving across a bridge that was flooding, the waves and water was crashing on the bridge.  I could barely see where I was going, but we knew we had to keep driving, or we would drown.  Or tornadoes spawned due to Katrina would hit us.

I recall I was not going to leave New Orleans.  I sent my three kids along with relatives to Texas and I was going to ride the storm out, right in the house with a cousin who initially had decided to stay back as well on what is known as the Westbank of New Orleans.  The pastor of the church I was attending called us and told us that we should all leave…that was Sunday afternoon.  My cousin did not want to leave and I remember having to almost force her to come along.  She didn’t want to leave a brand new house, her brand new business.  She said she wanted to ‘stay behind and believe God will spare her house and business…’

Seeing that she had like four babies, I wasn’t trying to hear it.  ”Girl!  You better COME ON here!”  I scolded her.

She decided to come along.

I remember as we left out of New Orleans, I saw many people who chose to stay behind.  I visited another church and the pastor was sitting in the church as it got dark….I asked him if he was going.  He said ‘he didn’t know…’

I guess he felt obligated as the pastor to stay.  I was glad to later find out that he chose to leave N.O., too.

Once our caravan made it to shelter-a hotel with the lights kept going out about 50 miles outside of Mobile-we all watched the news in horror and looked outside the windows where the threat of tornadoes was still very real all along the LA, MS, AL and FL coasts.  The next morning we made it to another shelter, we saw the news again and couldn’t believe what we were seeing.

ALL of New Orleans was flooded!

All of N.O. East-where I grew up…a whole mall…GONE!  Ninth Ward-where I stayed for a bit with another church member at one time….GONE!  Spain St….our first home after I was married….House was GONE!

We watched in horror at the littered bodies all up and down I-10, floating in the waters.

We watched as Canal St begin to look like something out of the riots of the 60s and 70s…folks looting stuff out of Walgreens to survive.

I would later hear of stories of people who actually saw the flood waters rush in literally down their streets when the levees broke.

They described it as a ‘wall of water’-a wave-just rushing down after them.

I remember Garland Robinette from WWL-TV on the radio asking survivors to call in so he could send help to them.  One lady just had a newborn baby like a week before.  When they heard the BOOM of the levees breaking and the waters rushing in, flooding their home, her and her family climbed into the attic.  An elderly relative had already died.  The water was coming into the attic and the girl sounded so tired.  She was begging  them to help them, so her baby could survive…

I cried and prayed that her and her baby with the relatives, made it out ok.

I think of all those people who stayed behind.  Who didn’t heed the warning(s).  Boats were sent out to rescue folks even AFTER the levees broke, and yet they chose to stay behind.

Now, I know.  A lot of folks COULDN’T leave due to no finances, no resources.  They didn’t have money or a car or knew anyone who they could ride with.

But help -however inadequate-was sent to them and they got out.  They suffered trauma and unmentionable horrors, but they got out.

All because they wouldn’t heed the warnings to GO!

This makes me think of the church and how there are millions of people who have heard the warning(s) to GO.  To COME OUT from among her…and yet for whatever reason, they make excuses and stay.

GOD WILL ALWAYS MAKE A WAY OF ESCAPE!

The Church may be all you know.  You may feel like if you leave the church, all your support systems will go.  You won’t have anywhere to turn.  You don’t even know HOW to go.

You may be like my cousin: you have seen the inadequacy of the church-and know that she is under judgment even-but yet you have decided you are going to stay and ‘pray away the storm.’  You think your intercession is going to stop the judgment of God, when God says in His Word that judgment BEGINS at the house of the Lord.  NOT the world.  THE CHURCH!  God’s word is the same…forever!  If He said judgment is going to hit the house FIRST, then IT IS…

Or you may be like those 1000s of people who wouldn’t leave their houses, even when help was sent.  The National Guards, boats, FEMA, help was sent, yet they rejected help and thought it best to stay.  And some of those same people perished with their stuff, too!

Sometimes, tough-love or radical intervention is needed to save someone who doesn’t know they need saving. This was the case with my cousin.  I wish sometimes I could go into some churches and just ‘snatch’ folks outta there…lol!  I really do!  Its not to talk bad about them.  Its just that they are so brainwashed, bamboozled and deluded that they really cannot see how much danger they are in.  This was the case with my cousin.  She got mad with me..(truth be told, she still is angry with me, just not for that!)…but as our relationship is…I told her the hard cold truth…whether she liked it or not, whether it agreed with her theology or not (she is a whole elder in the full gospel church, btw).

But I know she is glad she listened to me!

Anyway, you say ‘I’m gonna stay at my church and ride the wave out!  I’m a faithful servant and I’m gonna pray that devil away…’  And you just don’t realize it isn’t the devil!

It IS the Judgment of GOD!

When a place is under judgment BY GOD, there is NO prayer warrior that can pray judgment away…especially if that house is unrepentant.

Again, I know.  You’re scared.  You don’t know how to go.  You have been in your church for 20 years.  You feel like people are depending upon you.

But think about it:  what alternative do you have?  Stay?

How Do You Ride the Judgment Wave?

At your OWN RISK!  God can save you, rescue you.  Send Help.  But because you won’t take heed to the warning(s) He has sent TIME and TIME again, you may suffer loss, tragedy, trauma…

Because of your FEAR and DISOBEDIENCE!

It all worked out.

But…I share this to encourage you.  You DO NOT have to ride out the judgment wave with your church.  GET OUT BEFORE THE WAVE HITS…BECAUSE ITS COMING!!!!

Once it hits, it may be harder-if not impossible-for you to escape!