In propaganda and arguments, people will often use logical fallacies, flawed logic, to win their audience over. It’s a form of manipulation. Logical fallacies are rampant in teachings in the Institutional Church. According to Wikipedia, “A fallacy is an incorrect argument in logic and rhetoric. It gives a result that is not valid or lacks soundness.”

A common one used is called “begging the question,” or “circular reasoning.”

Interviewer: “Your resume looks impressive but I need another reference.”

Bill: “Jill can give me a good reference.”

Interviewer: “Good. But how do I know that Jill is trustworthy?”

Bill: “Certainly. I can vouch for her.”

The church I used to attend used this one often as one of many manipulation tactics. They would say that God had appointed your pastor as a spiritual authority over you, and if you didn’t submit to him or her, you weren’t submitting to God. Whenever a visitor came to the church, at the end of the service when the pastor gave the altar call to accept Jesus and/or join the church, he would say, “You’re not here by accident. You are here by divine appointment,” meaning that God had brought them there, and it was His will for them to join – which indirectly meant that if you just happened to be there, you were under the pastor’s “spiritual authority.”

Pastor: (premise) God Himself has called me to be your pastor, which means  (faulty conclusion) you are under my spiritual authority.

You: But how do I know I am under your authority?

Pastor: (back to first premise) Because God has called me to be your pastor.

So in order for the conclusion to be true, you pretty much have to assume the premise is true, taking his or her word for it. Churches will also often use emotional manipulation to distract people from this flawed logic. I used to fall for this one all the time. Has you ever had this method used on you? 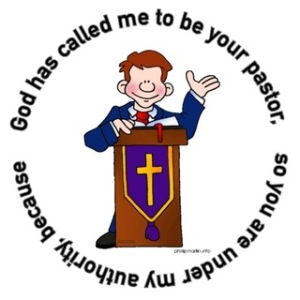