Right on the heels of the Charlottesville riots, Hurricane Harvey made landfall near Rockport, Texas bringing with it death and the loss of property. One of the major headlines concerning this natural disaster had to do with Joel Osteen,  a prominent, mega-preacher in Texas who sent a tweet stating that he and his wife will pray for the those affected. The backlash started almost immediately on alot of social media platforms. Many tweets, memes, videos were posted where people were berating Joel and demanding more than “prayers” from him.

Joel Osteen and Lakewood Church are experiencing a PR nightmare, we have seen corporations that have bounced back from corporate gaffes and others destroyed from it. We are yet to see how this incident will affect Joel in the long-term. The Institutional Church herein referred to as the (I.C.) is part of the world system so it uses the tactics of the world to get by, the Spirit of God is not in any of their dealings.

There are those who have shown unwavering support for Joel  but what caught my interest is that there is a substantial amount of people as seen on social media who feel one thing for mega-preachers – ANGER. Gone are the days when people would shy away from speaking against a “man of God.” After Joel’s tweet, the comments came fast & furious making it seem like people were waiting for an incident to happen so they can let loose and tell Joel what they really feel.

There are people who are mad, fuming not just at Joel but at the I.C. and at mega-preachers. In some way it felt like there was nothing Joel could do to appease the critics, the arguments started with why didn’t he open the church early to he opened the church because of the social media pressure. Any interview Joel gave was dissected to show how his efforts weren’t genuine, even his body language was being analyzed to strengthen the claims that he didn’t want to be there helping people. Every thing he did was an offense.

Clearly, there are people who still love & support mega preachers but there is also another group that have become weary of mega-preachers and refuse to see any good in them. This group sees mega-preachers as scammers, Period! even acts of kindness are looked at suspiciously as many wait for the money grab to be revealed sooner or later.

I have belonged to both groups of people at different times in my life. I have blindly loved and supported mega-preachers and even defended them to critics, then as the years went by I became a critic as I noticed their teachings were pseudo-deep, they embraced the world and repeatedly taught the prosperity gospel. I left the church and would watch a lot of videos exposing ministries and false preachers we have today, which are plenty. The Irony is, in both states I thought I was walking in truth but the reality was I was still deceived. I had some partial truth in that I could see some of these leaders were false teachers but I still engaged in I.C. practices & believed I was born again because I had asked Jesus into my heart, I believed in a false gospel.

The major spiritual problem today is not the mega preacher phenomenon or false teachers – that is just a symptom of a bigger issue. If we spent time analyzing who is a false prophet and who isn’t we would be here for days as the list is endless. Time is really of the essence so what you need to see is that the entire I.C. is condemned and the Spirit of God is not there. For those who have left the I.C., if they still engaged in religious practices or hold on to church teachings, they could still be deceived.

Pastor Pam Sheppard addresses the Spiritual problem in our time in The Church of The End Time Zombies, an excerpt reads:-

“Statistics show that floods of people are leaving the I.C. daily. The question is, where are they going? It could be that many of these folk are just joining up with yet another branch of the I.C. or doing the I.C. thing at home. Opening a church in your home by teaching the same false doctrines and practices, causes your home to be just as dangerous.”

The I.C. has been taken over by fallen angels and demons, nothing good can come out of it. The Lord Jesus already prophesied the future of the I.C. in the parable of the mustard seed.

As people who are preparing for the return of the Lord Jesus, we need to understand that holding on to partial truths is just as dangerous as believing a lie. It is good to know who is a false teacher, so you can avoid their traps, but spending time studying and exposing one preacher to the next is a tedious task as there are many.

The I.C isn’t under attack by being infiltrated by false teachers, it’s actually the I.C. that creates an environment for these preachers to grow and thrive. A word from Pastor Pam concerning mega-pastors in her own personal experience.

“A word of caution. The religious demon assigned to me tried to set me up to become a false prophet.  In several dreams, he showed me standing before huge audiences, walking up and down across a platform with my bible in my hand, preaching and teaching.  He even showed me pastoring a church of about 10,000 people.  Because I sought after the power to slay in the spirit, after 10 years of seeking, I got it. I could wave my hand, and certain ones would fall out, unconscious.  However, I began to question this power because I noticed that the ones in my congregation who fell out the most, were also those who could not STAND for the Lord, relapsing or backsliding constantly.  So I said to myself, “Pam, there is something wrong with this so-called gift. This cannot be from the Holy Ghost!”  Once I prayed to the Lord and asked Him to “show me the darkness,” I got quite the wakeup call that revealed that the mega preacher phenomena of today is NOT of the Lord.  It is a combination of human charisma, “anointed” by the enemy’s power.”

Understand the times that we live in so you won’t be deceived with the spiritual blindness that’s all over, if you don’t know where to start, read “The Church of the End Time Zombies”, you can get a copy at:- 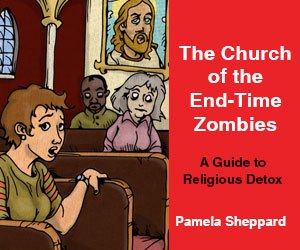 Who Are The Birds in the Parable of the Mustard Seed?

The Apostle Paul wrote to the Romans, “Let the God of peace fill you with all joy and peace in believing, that you may abound in hope through the power of the Holy Ghost.” (Romans 15:13 )To the Colossians,Paul wrote “Let the peace of God rule in your hearts.” (Col 3:15)  Yet there is such a thing as a false peace. I just watched Oprah’s interview of Joel Osteen, and what manifested clearly is a false peace  by a self-proclaimed blessing. Although he took a stronger stand on the Lord as the only way to the Father than he has in the past,  Osteen hesitated with tongue in cheek as he made it clear that homosexuality is a sin.Yet he equated sodomy on a  with “telling a lie or being proud.”

When a Osteen struggles to not offend anyone and   he tells a tv audience that homosexuals shall go to heaven,  he detracted from the word of God.  Paul wrote and warned the Corinthian believers that effeminates shall not inherit the kingdom of God. Does inheriting  the kingdom equate to “going to heaven?” Not completely, but it certainly is a part of the overall package. To be absent from the body is to be present with the LORD “IN HEAVEN” while He remains there. Consequently, Osteen has sent out a platitude  of a” false peace.”Commonsense ought to tell Osteen that  since  God destroyed Sodom primarily because of homosexual activity, it’s a sin far more damning than a lie or pride.. To not be truthful with the gay community is in itself, a lie. Along these same lines, when preachers expound on the escape of a lukewarm, deluded Laodicean age through a pre-tribulation rapture or messages that uphold financial prosperity for all, a  false peace prevails.

Yet when the evil day comes, we will need the peace of God to rule. In this country, we have the expectation that happiness is ours by our American birthright, so we are in constant pursuit of it, particularly on the weekend.  I should spell it “weak end.” Many are speeding in are cars, fighting  in parking lots and pushing forward in various malls and supermarkets, with dentist appointments, diets,  vacations, manicures, gyms, and restaurants on our minds.  The irony is that as a nation in pursuit of happiness, “our weak end” is that we find no peace.

Moreover,  there is coming a day when all of our material comforts shall fail us and the fundamentals of food, water and shelter shall ascend in priority.  I know because I have seen it in the spirit.What usually causes us to lose peace is a lack of understanding that leads to confusion. In other words, what we don’t know brings stress. Therefore, in 2012, I offer a few points that will help you to let the peace of God reign.

In the New Year, many google for prophecies because they have no peace in uneasy times. A wet blanket of worry, fear and stress has fallen on multitudes of professing Christians who search the web for a prophetic messages. Since they are reading the signs of the times, believers are looking for confirmation and assurances that we will make it beyond December 21, 2012. In the New Idolatry you will find these words:”Doubt can be a good thing, particularly when those fictitious, religious foundations upon which a captive has built his pride system become shaky.”

Yet in the final analysis, the message that should give you peace is both spiritually historic, prophetic and biblical. Simply put, if you be in Christ, He has already spoken peace to your troubled spirit t when He he prophesied that “if you endure to the end, you shall be saved.” (Matthew 24:13)

This ministry is about preparing the elect of God to “endure to the end,” through publications, deliverance counseling, deliverance mentoring, and deliverance training. Ours is a Christ centered, a spiritual warfare and a spiritual empowerment strategy.  So our help is available to you. Send an email to pamsheppard911@yahoo.com or call 518-477-5759.