I did not mention WHOOPING in the video because I have witnessed those who did not  whoop yet they still  wrecked  a congregation and caused an emotional uproar with either their prayer or their sermon.  Nevertheless, those who whoop a prayer rarely fail to provoke strong emotional outbursts within the church service.

A simple definition of whooping is that it is an oration that will begin to unfold into either a prayer, but most often erupting in  a sermon when the orator’s words and short phrases take on a rhythmic quality that borders on being a musical sort of repetitive chant. A denominational practice among the  Black Baptists, Pentecostals and less often, the Methodists, the orator will begin to rattle between each phrase, rasping and panting like  someone who suffers with whooping-cough. Other antics can accompany the whooping.  He may bang his fist into the podium, run across the platform, break forth with a loud shout or a shrill or scream, start singing or break out into the holy dance, as its called.   As expected, lots of sweating transpires.

In a paper written about the history of black preaching, Henry.H. Mitchell traces what he refers to as “an art” to West Africa. When I think of worship in Africa, one word comes to mind.  WITCHCRAFT.  Though Mitchell is in support of black heritage in general and black preaching styles like whooping in particular, his scholarly work confirms my greatest reservations:

We turn now to the questions of whence and how the patterns and content of early Black preaching came, and how the tradition has grown from there. Black preaching and Black religion were greatly influenced by the confluence of two streams of culture, one West African and the other Euro-American.  The primary stream was African. Indeed, the Black church was an attempt, born of a cultural and religious nostalgia, to reestablish on American soil the worship practices…… As DuBois said in 1903, this first church was “not by any means Christian,” but “gradually, after two centuries, the church became Christian.” He added, “It is this historic fact that the Negro church of today bases itself upon the sole surviving social institution of the African Fatherland that accounts for its extraordinary growth and vitality.”21 Dubois went on to suggest that the preacher was also a cultural survival, and Woodson agreed, adding, “The Negro ministry is still the largest factor in the life of this race.”

It is altogether natural, then, that the Black homiletic should reflect these same African roots. The languages of Africa are manifestly tonal, and all speaking includes such linguistic features. When Marshall preached with sonority, he was carrying on a traditional African musicality. Yes, he preached in English with impressive polish and dignity, but African rhetorical style is always dignified as well as sophisticated. Sonority is not a sign of primitivism, as is so often assumed even today.*

The Lord Jesus made it simpler and plain.  You know a tree by its fruit. Roots represent the  history of a thing.   You cannot expect that any entity will bring forth good fruit for Christ if its history  began with the worship practices of Africa and as Mitchell acknowledges the words of Dubois, the original African-American church  was just that.  It was African and not Christian!!

I  have personally witnessed how whooping in both a prayer and a sermon can cause churchgoers to momentarily lose their minds— from a woman who threw an infant up in the air after a preacher whooped a message called “Dry Bones,” to several others who fell to the floor, rolled  around like snakes and frothed  at the mouth like they were having a seizure, either while the minister was whooping or immediately after he was finished.

In Come Out of Her God’s People,  there is a chapter on the altered state of consciousness which introduces the term “communal intoxication.”   Here is an excerpt which summaries what I suspect occurs: 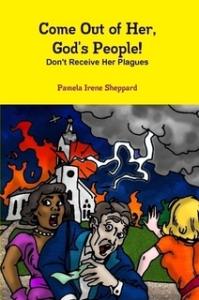 Communal intoxication is defined by the founder of sociology, Max Weber as the supernormal ability of magicians, wizards, witches and charismatic religious leaders. With the God concept at its center, such leaders induce altered states in their followers as demonstrated by the congregant’s manifestations of convulsions, trembling and intense effusions of excitement and ecstasy. Does shouting, the “holy dance, holy rollers, holy laughter,  running around the church, barking and making animal sounds,  tongues, neck bobbing and slain in the spirit fall into this category? This is a question to take very seriously. Denominational preachers who ‘whoop” a sermon have been known to set off widespread communal intoxication where the people enter into a convulsive frenzy.

To send Pam Sheppard a personal message that no one else sees and receive a personal response, fill out this contact form.